99% of the 30,000+ fish species on Earth live exclusively in either salt or fresh water. The rest are known as “diadromous fish,” a category of unique fish that spend part of their life cycle in salt water and part in fresh water. The most well-known diadromous fish are Pacific Salmon, famous for jumping up waterfalls and dodging grizzly bears.

Diadromous fish play a vital role in coastal ecosystems. Their movement from salt to fresh water is essential in transferring ocean-derived energy into estuarine, freshwater and upland habitats. In providing sustenance—as eggs, juveniles and/or adults—for countless other species, they literally help to drive coastal and upstream food webs.

While Atlantic Salmon and other large diadromous species exist in our region (e.g. Striped Bass, Atlantic Sturgeon, American Shad), Long Island’s rivers and streams host only four smaller species: Alewife and Blueback Herring (collectively known as “River Herring”), American Eel and Brook Trout. Unfortunately, their populations have been severely impacted on Long Island as dams and culverts have restricted access to most of the freshwater habitat they require.

Alewife – Alewife (Alosa pseudoharengus) are one of two species of river herring. They are generally 10-12 inches in length with slender bodies and deeply forked tails. They are generally silver in appearance, with a characteristic dark spot behind their gills on both sides.

They are anadromous species that spend the majority of their life in salt water but migrate annually into freshwater to spawn. They inhabit offshore areas during most of the year, occurring on the Continental Shelf at depths below 150 feet from Newfoundland south to the North/South Carolina region.

Alewife migrate into and stage in estuarine waters in late winter. Their movement into freshwater spawning habitat, which is governed by changes in water temperature, occurs on Long Island from early March through mid May. They prefer to spawn in slower moving, “flat water” areas. Historically they took advantage of access to freshwater “kettle ponds”.

Though the adults immediately return downstream after a spawning event, the newly hatched juveniles generally remain in freshwater and estuarine habitats for the first few months of their lives. River herring generally live about eight to ten years and begin to spawn between the ages of three and five. They typically make four to six spawning migrations during their lifetimes.

Blueback Herring – Blueback herring (Alosa aestivalis) are similar to alewife in many ways, including their general appearance and life cycle, but there are some distinct differences. Their size is similar, but they have a thinner body shape. They lack the dark spot on their sides, but their backs (as their name suggests) have a darker blue/green color. Their eyes are slightly smaller and closer their mouths.

Blueback herring are found at similar locations and depths as alewives, but across a range that extends further south to the coast of Florida. Their migration generally occurs later in the season than alewives. Finally, where alewives prefer calm or slow-moving water, Blueback Herring prefer to spawn in moving water with rocky bottoms. 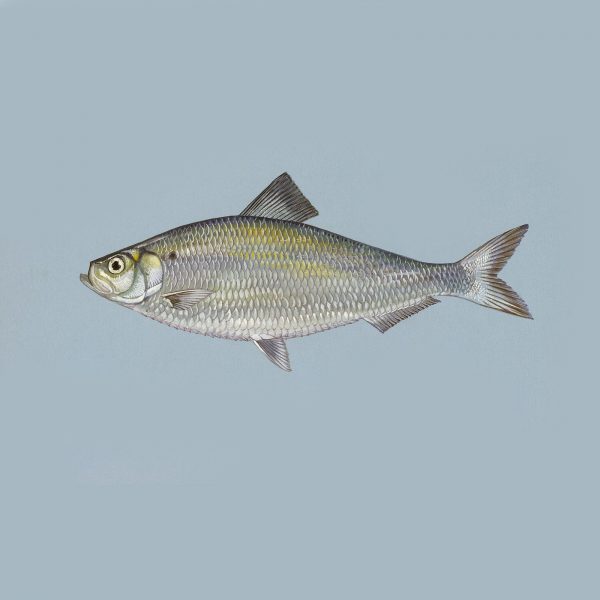 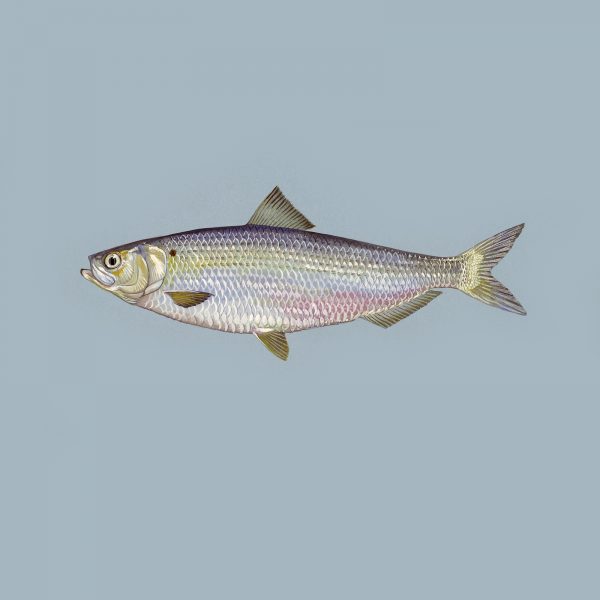 American eel (Anguilla rostrata) are smooth, slender fish that are snake-like in appearance. They are catadromous, meaning they hatch in salt water, but spend most of their lives in freshwater (or, in some cases, brackish water). All American eels start their lives in an area of the North Atlantic known as the Sargasso Sea. After hatching the leaf-like pelagic juveniles drift towards the coasts. As they approach shallow coastal waters they transform into translucent “glass eels.” Later, as they move into estuarine waters, they acquire pigmentation and become “elvers.” The elvers, still only a few inches long, find their way into freshwater rivers or streams where they will spend the rest of their lives as adult, but sexually immature “yellow eels.” Eventually, after as long as 30 years, they reach sexual maturity, become “silver eels” and return to the Sargasso Sea to spawn and die. Throughout their lives in freshwater, American eels are primarily nocturnal, feeding at night on a diverse selection of prey. They can grow up to five feet in length. 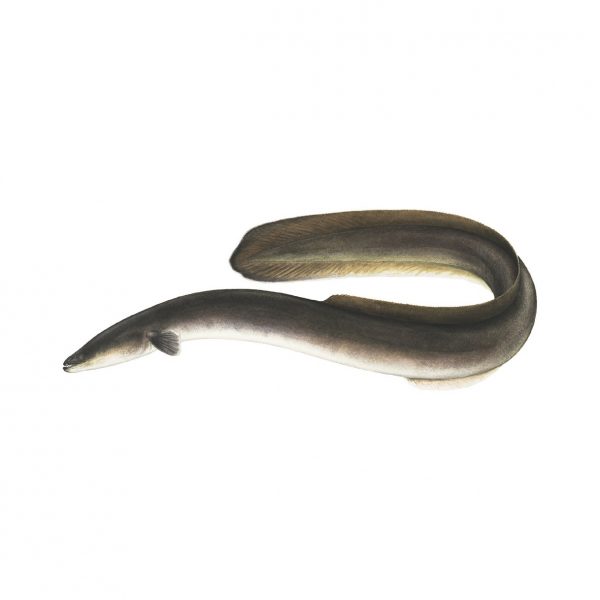 Brook trout (Salvelinus fontinalis) are freshwater fish native to eastern North America. Technically not a trout, they are a member of the char family.  A “semi-diadromous” population evolved on Long Island and other parts of the North Atlantic Coast. These fish hatch and spend most of their lives in freshwater, but they migrate into estuarine waters to forage for months at a time. Access to abundant forage in the estuary allowed these sea-run or “salter” brook trout to grow large, making them a prized target for anglers. Their presence in the South Shore’s coastal streams, including the Connetquot and Carmans Rivers, was part of the region’s development as a popular destination for New York City sportsmen.

While river herring and American eel are tolerant species that can survive in a range of habitats and water quality conditions, brook trout are cold water fish that require more precise, pristine conditions to thrive. In this regard they present additional restoration challenges. Most significantly, suitable brook trout habitat cannot be restored simply by reconnecting streams with fish passage structures. Because they require cold water, the shallow impoundments common on Long Island present thermal barriers to brook trout. Shallow, warm water impoundments are migratory barriers to brook trout, even when equipped with fish passage structures. In this regard, efforts to restore brook trout often necessitate the removal of dams and the restoration of natural, free-flowing cold-water streams. 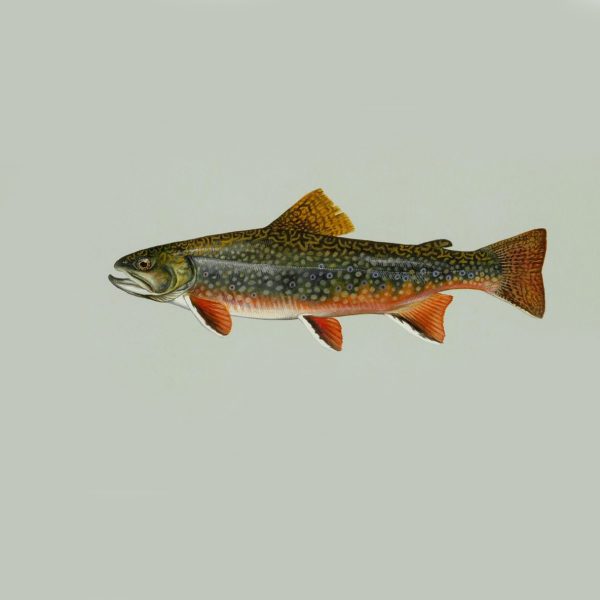 The decline of diadromous fish has a major impact on the health of our coastal ecosystem, as these fish play a vital role in transferring ocean energy into estuarine, freshwater and upland habitats, and provide indispensable forage for countless other species. It is no exaggeration to say that they help to drive Long Island’s entire coastal food web. Rebuilding their populations across the region is a critical component in restoring the health of our estuaries.  Seatuck’s Long Island Diadromous Fish Restoration Strategy provides a long-term road map for rebuilding populations of River Herring, American Eel and Brook Trout. It provides background on the region’s diadromous species, details available restoration tools and techniques, establishes benchmarks to measure restoration efforts, and identifies priority restoration sites in each of Long Island’s thirteen Towns.

Seatuck is working with partners across the region to improve access and restore local populations of ecologically important diadromous fish. The Annual Long Island Volunteer River Herring & Eel Survey – organized by Seatuck and our partners at the Long Island Sound Study, Peconic Estuary Program and South Shore Estuary Reserve – is a key part of the effort. The community science project aims to find the waterways where “remnant” runs of river herring and American eel still exist, and then to monitor the size and timing of those runs.

Participants in the survey are asked to commit to surveying a local waterway from mid-March through mid-May. The survey protocol involves visiting a neighborhood river or stream and spending 15 minutes looking for river herring and eels, or signs of their presence. The visits can occur daily, weekly or as often as possible. All data is good data – the more trained eyes we have on the water, the better! Observations and information from the survey visit are then submitted through an easy-to-use on-line application on your computer or mobile device and automatically becomes part of our study. The on-line app helps you to geo-locate your survey location and even submit photos. 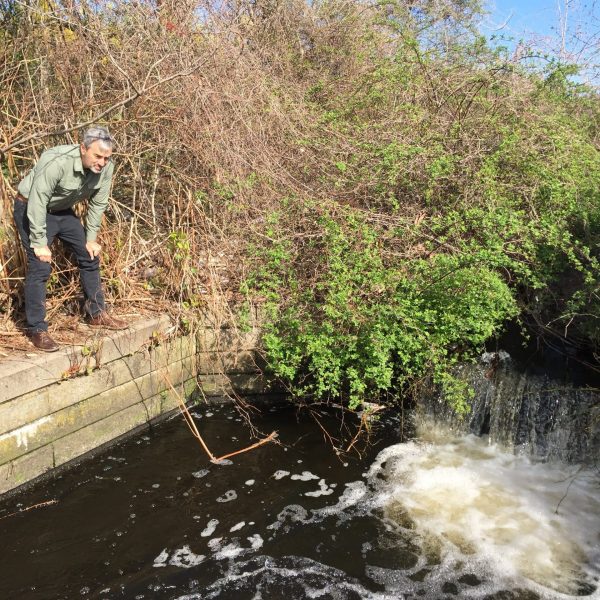 Importance of preserving the American Eel

As mentioned in Seatuck’s Diadromous Fish Restoration Strategy, diadromous fish help drive Long Island’s entire coastal food web by bringing ocean energy into estuarine, freshwater, and upland habitats, and by providing forage for a number of other species. American eels are one of those valuable diadromous fishes. More specifically, American eels are catadromous meaning they spawn in salt water and spend most of their lives in freshwater. As juveniles, American eels drift towards the coast and estuaries where they transform into translucent “glass eels,” and soon acquire pigmentation and turn into elvers.   At this stage of their lifecycle, American eels will often encounter dams and other obstructions when trying to find upstream habitat. Elvers are known to be able to climb up dams, however for every meter of dam height it is thought that eel passage is reduced by 10% (Williams, 2016). Basically, there is a great number of eels that are likely unable to get past these barriers. Additionally eels are extremely valuable to the foreign food market, and in 2015 were known to sell for $2,500 per pound (Williams, 2016). Harvest is currently only legal in Maine and South Carolina, but the eels value makes them a prime target for illegal poachers as well. With these threats and American eel populations steadily declining over the last few decades, it is even more important and urgent to provide these species with opportunities to reach needed habitat. 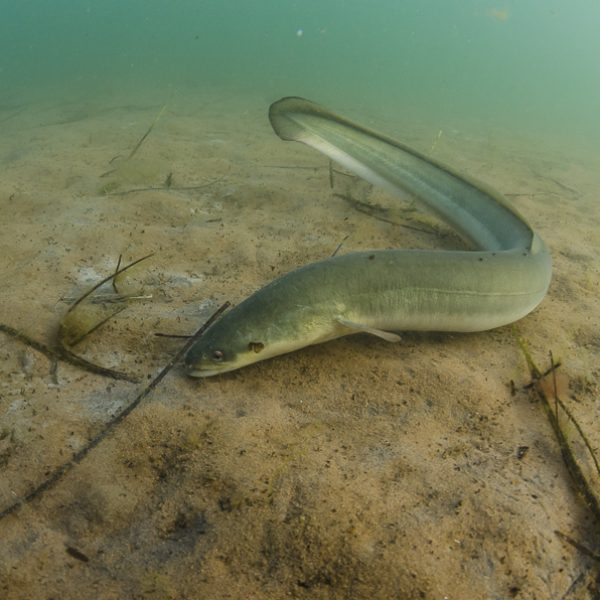 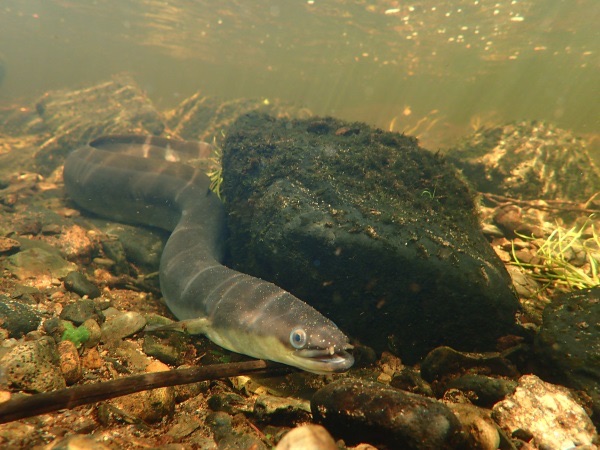 Strategies for preserving the American Eel

Traditional fish passages are great tools to assist other diadromous species, like alewife and blue back herring when getting upstream, however they are often not outfitted for American eels to use. Seatuck would like to explore potential options to create “eel passages” to improve the number of American eels that are able to move upstream.   Eel passages are basically made up of a ramp with some kind of climbing medium. The climbing medium is meant to provide eels with something to crawl through or over, and can be items like artificial mesh, turf, or pegs. Additionally some eel passages trap eels in a holding tank, like a 5-galloon bucket, so that they may be transported above the dam manually. Eel passages will also need water to flow over the ramp to attract the eels to move upward. Ramps can be attached to the dam itself, or built adjacent to the dam. Construction costs and feasibility depend on the height of the barrier, size of the river, and various environmental conditions. However overall, construction for these eel passages is thought to be fairly easy and inexpensive (Gulf of Maine Council on the Environment, 2007).

Next Steps for Seatuck

Seatuck is currently connecting with other practitioners in the Northeast who have implemented eel passage projects in the past to gain insights from these off-island efforts. We are also evaluating potential sites where eel passage would be beneficial on Long Island. Seatuck plans to implement a few pilot eel passages on Long Island streams and monitor their performance.

Proceedings of a Workshop on American Eel Passage Technologies. Special Report No. 90 of the Atlantic States Marine Fisheries Commission (2013) 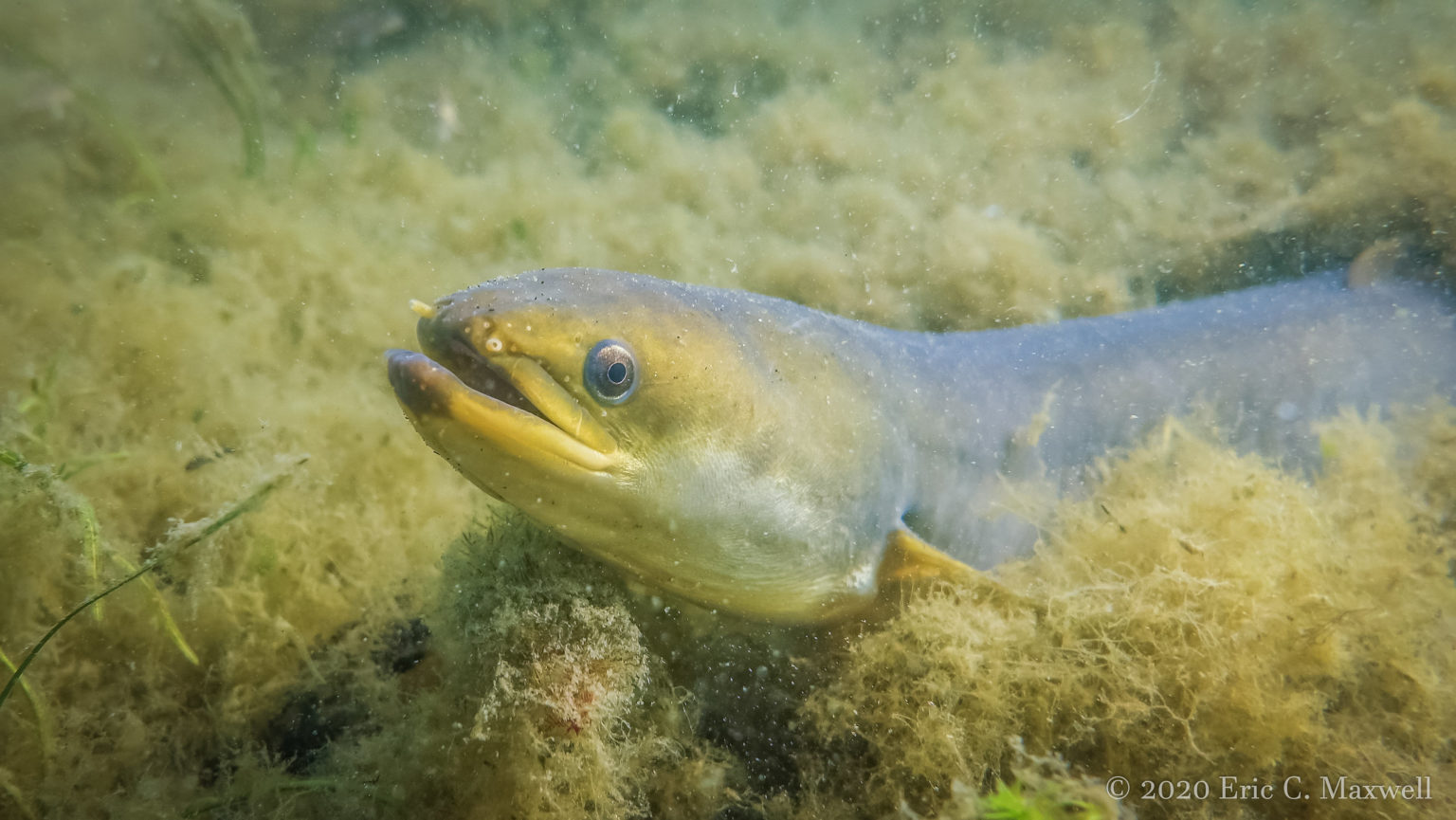 Stay up-to-date about the latest wildlife conservation news. Sign up for our free e-newsletter today!