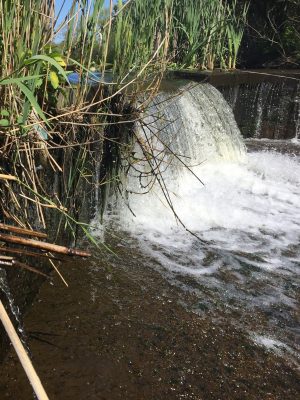 River Herring have been documented at Mill Pond, Bellmore Creek for the past several migration seasons; it’s one of only a two-dozen streams on Long Island where remnant runs of the ecologically valuable fish still exist. Access upstream would provide vital freshwater spawning habitat for River Herring, which allow the creek’s run to grow and provide momentum for overall efforts to restore populations throughout the South Shore Estuary Reserve.

In 2018, Seatuck was awarded the NYSDEC Division of Marine Resources Grant for Tributary Restoration and Resiliency to design fish passage at Mill Pond and restore critical habitat in Bellmore Creek.

Seatuck has assembled an Advisory Committee including representation from Nassau County, NYS Office of Parks, NYS Department of Environmental Conservation, Nassau County Soil and Water District, Town of Hempstead, the South Shore Estuary Reserve, Trout Unlimited, The Nature Conservancy, South Shore Audubon, and the Bellmore Civic Association. Seatuck has issued a request for proposals and is nearing the point of engaging an engineering firm to start the design process.

Why is this project important?

River Herring are diadromous fish, meaning that they spend part of their life cycle in freshwater and part in salt water. These fish play a vital role in transferring ocean energy into estuarine, freshwater and upland habitats, and provide indispensable forage for countless other species. It is no exaggeration to say that they help to drive Long Island’s entire coastal food web. Rebuilding their populations across the region is a critical component in restoring the health of our estuaries. Check out our Long Island Diadromous Fish Restoration Strategy for other priority restoration sites across Long Island to save this valuable species.

How can I learn more and get involved?

Stay up-to-date on the Bellmore Creek Fish Passage Project’s progress through our website, Facebook Page, and Instagram. If you’d like to get involved or attend an Advisory Committee Meeting, email ehall@seatuck.org for more information.